Ex-couple Brad Pitt and Jennifer Aniston ran into each other again for the second time in this awards season at the 2020 Screen Actors Guild (SAG) Awards ceremony on Sunday night in Los Angeles, January 19, 2020.

They were married for full five years from 2000 to 2005 before they called it quits due to a third-party on Brad’s side. However, a few years later, here they are single again, and both are taking credits through their awards for their outstanding performances in their acting careers and celebrating each other.

In the SAG Awarding ceremony, Pitt accepted his Outstanding Performance by a Male Actor Award for his supporting role in Once Upon A Time… in Hollywood. As he received his award with an acceptance speech where he jokingly credited his hard work on his role, referring to a scene in the film, where it was difficult for his character to portray a state of being high, shirtless, and not be able to get it on with his wife. As the ceremony’s audience clapped and laughed at his joke, the camera cuts to Aniston, who smiled and clapped as well. 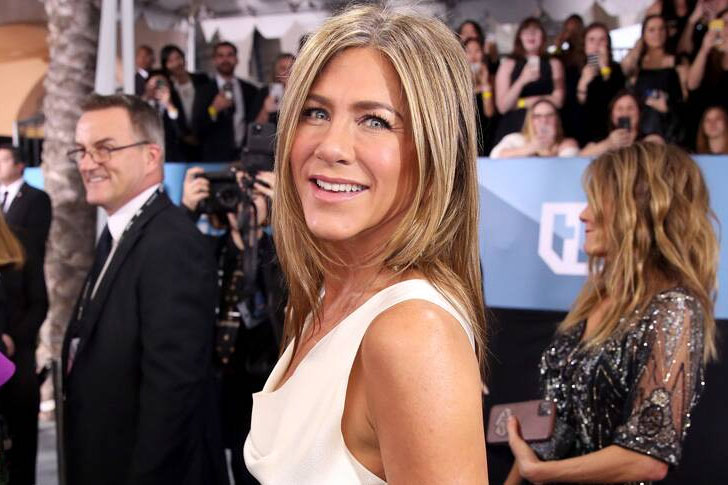 Likewise, Pitt also had a moment in the ceremony, where he was caught on camera appreciating his Ex’s award acceptance speech at the backstage monitor shortly after he received his own. Aniston is also an awardee of the Outstanding Performance by a Female Actor Award for her credit role in the drama series, The Morning Show. Caught on video by many reporters was the proud moment of Pitt watching Aniston give her speech on the monitors backstage with a wow and a proud smile on his face.

Indeed, SAG Awards became such a momentous event for the Ex-couple.

In an interview by Cheryl Hickey of ET Canada, who caught up with Aniston after her award acceptance, she was told by Hickey about Pitt’s emotional reaction when he was watching her deliver her speech on the backstage monitor. Aniston responded in disbelief. But, okay, maybe she believed it but not to the degree of him shedding happy tears for her and her speech.

Like a cherry on top of a vanilla sundae, the rest of the world watch Pitt and Aniston greet each other as they both get photographed, saying hello to each other and have some comforting gestures, touching here and there at the SAG Awards ceremony

As a result, social media rave about the significant moment between Pitt and Aniston as many of the viewers and insiders in the SAG Awards took their photos and updates to Twitter and all other mediums – sparking the discussion of the probability of reunion for the former power couple. Imagine all the annoying pop-ups about it turn into real, dreamy good news for fans while in the middle of their online classes.

That Sunday’s event was the second awarding ceremony for this year, where the former couple ran into each other, inevitably. With both appearing to take the credit for their performances on their respective roles on TV and in film, the fans can’t help but watch out for their run-ins and discuss their possible reunion.

Also, earlier this month, at the Golden Globe Awards, Pitt was asked by Entertainment Tonight if he welcomes running into Aniston at the awards event. Of which, he responded very well and said how they are both good friends with each other.

He also added, teasing how they’re running into each other could be the “second most important reunion of her year,” referring to the high degree of possibility of a reunion also between Friends – the hit TV sitcom, being the first important.

While some friends and fans don’t think that Brad deserves Jen, people can’t help but talk about it and anticipate the idea of one day seeing it actually happen and become official.