As fans rave about the degree of possibility of BRENNIFER 2020, or Jennifer Aniston and Brad Pitt reunion, to happen, here is Aniston taking on Instagram her preparations for the 26th Screen Actors Guild Awards held last January 19, 2020.

Also known as SAG Awards 2020, it is a prestigious ceremony that honors the outstanding performances of actors and actresses on television and film for the preceding year. However, it is not only in this event that the actress got recognized.

In fact, in this whole season of awards, ex-couple, Pitt and Aniston, can’t help but cross paths on the red carpets as they are both recognized actors for their performances on their respective TV and film credits.

With Aniston appearing in her stunning SAG Awards look, fans can’t help but gush over her eye-catching look, not to mention her run-in with Pitt.

Aniston, who is already 51 years old, arrived wearing a lovely white gown by John Galliano, included in the Christian Dior collection. The dress featured not only her glowing personality but also her curves. A lot of people thought her awards ensemble gave her that effortless degree of class and elegance. While many asked her about her looks, her Instagram post could most likely be her very aim. 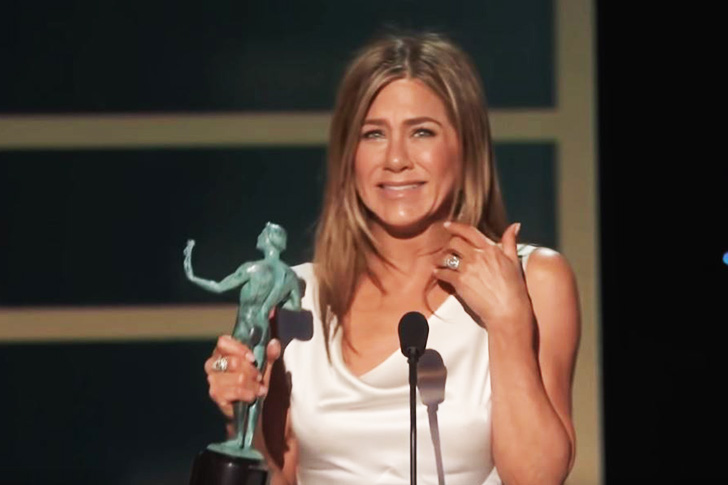 “No wrinkles… harder than it looks,” she posted with a photo of herself, leaning back in her car ride on the way to the SAG Awards. “Somewhere between these two photos, my peers gave me a gift I will cherish and a night I will never forget. Thank you @sagawards, @themorningshow, and our incredible cast and crew. Let’s get back to work.”

In Aniston’s interview with Entertainment Tonight, she revealed how her lovely white gown was a gift she got for herself. According to her, the vintage dress was an investment, and right she is because we think so, too! That dress draws out her sunshiny glow and the curves she got to show, especially on special events like this.

To top that day, Anniston took home the Outstanding Performance by a Female Actor Award for her credit role in the drama series, The Morning Show. But of course, to most fans, the highlight of the day, just like in all other previously graced ceremonies, were the instances of them getting a photo of Brad and Jen together and the hopes of having a picture with them. It’s just crazy!

Pitt and Aniston were married for five years — from 2000 to 2005 — before they called it quits due to a third-party on his side. However, a few years later, here they are, single again. They are both taking credits for their outstanding performances in their acting careers and celebrating each other’s winnings.

In the SAG Awarding ceremony, Pitt also accepted his Outstanding Performance by a Male Actor Award for his supporting role in Once Upon A Time… in Hollywood. As he received the honor, he gave an acceptance speech where he was jokingly giving credit to his work challenging role, referring to a scene where his character was high, shirtless, and not be able to get on with his wife. As the ceremony’s audience applauded to his joke, the camera cuts to Aniston, who smiled and clapped to his joke, too.

In the same way, Pitt also had a moment to appreciate his ex’s acceptance speech backstage, shortly after he received his award. Caught on video by many reporters was the proud moment where Pitt was watching Aniston deliver her speech on the monitors backstage with a proud smile on his face.

The best thing about it all is we all got it on record, and it’s likely what everyone, and we mean multi-generationally everyone, will be talking about for some time.

Indeed, SAG Awards became such a momentous event for the ex-couple.

In an interview with Cheryl Hickey of ET Canada, who caught up with Aniston after accepting her award, she revealed Pitt’s emotional reaction when he was watching her delivering her speech on the monitor backstage. Aniston responded in disbelief. But, okay, maybe she believed it but not to the degree of him shedding a tear to her address.

Like a cherry on top, Pitt and Aniston were photographed saying hello to each other at the event. 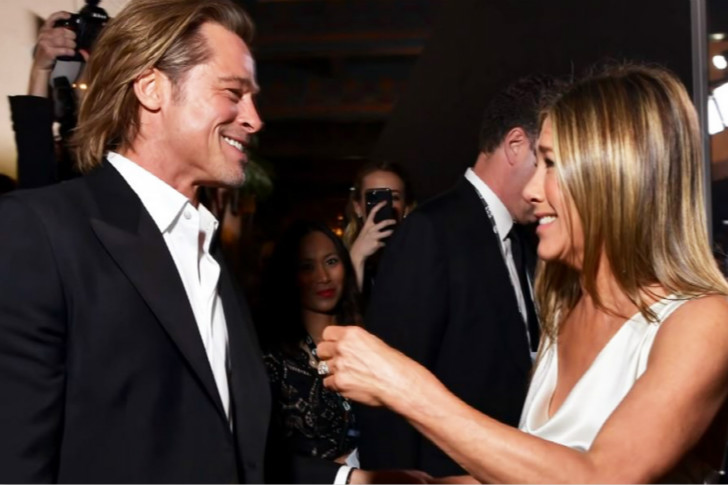 As the rest of the world watch Pitt and Aniston get back together, many of the viewers and, of course, the insiders discuss the momentous moment between the former Hollywood couple on Twitter.

The event was the second awarding ceremony for this year that the former couple ran into each other. With both taking credits for their performances on their respective roles on TV and in film, the fans can’t help but watch out for their run-ins and discuss their possible reunion.

Earlier this month, at the Golden Globe Awards, Pitt was asked by Entertainment Tonight if he would welcome running into Aniston at the event. Of which, he responded very well and said how they are both good friends with each other. 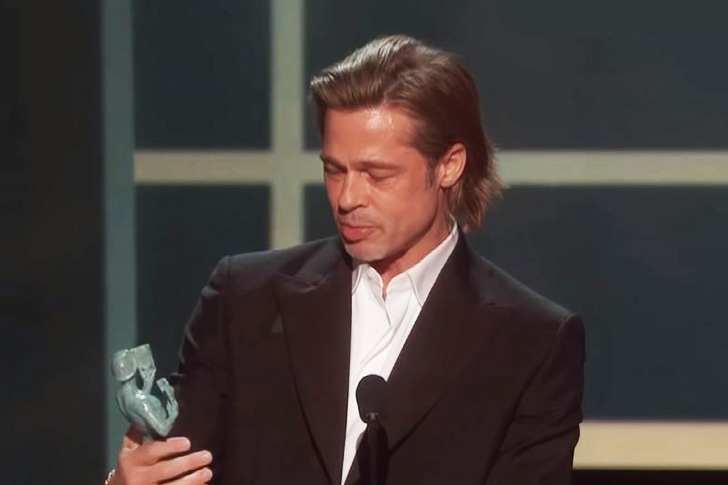 He also teased how they’re running into each other could be the “second most important reunion of her year,” referring to the possibility of a reunion of the hit TV sitcom, Friends, being the first important.

While some friends and fans don’t think that Brad deserves Jen, people can’t help but talk about it and anticipate the idea of one day seeing it happen, making it official.

Despite how both Pitt and Aniston have been referring to each other as friends. We can’t promise not to doubt that degree of friendship, though, Brennifer!