Celebrity Fashion Looks You Can Copy while at the Airport

Travelling is one way for us to meet new people, experience new things, try out new and exotic food, and of course try out various fashion trends. While dressing up in the airport can be counterproductive if you are to shuffle between terminals, haul luggage above your head and then run around with bags in tow, making investments on a set of comfy and fashionable clothes is also an essential part of the journey. We can draw inspiration from what our favorite celebrities had been seen wearing then they travel in sense and style across the world.

Below is a list of the best celebrity fashion looks you can copy while at the airport.

Boyfriend jeans are immensely popular because of their lax denim look. Nobody does it better than Jessica Alba in her breezy, simple and oversized layers. Of course, if you are Jessica and trying to travel low-key, you probably would want to be invisible when traveling just like the ability of her character, Invisible Woman, in Fantastic Four. But while we give credit to Jessica as a superhero in her own right, the power of invisibility may not happen in real life. So here come boyfriend jeans. As they are extremely common and comfortable, you can blend in easily.

We like flexibility when travelling because you be in a varying degree of uncomfortable positions, so putting on oversized Oxford shirts seems like a good idea. It is this freedom to move that probably made Gigi Hadid sport oversized clothes, while keeping color experimentation to a minimum. Gigi sure can be a head-turner, even when trying to remain hidden in the crowd.

Apart from our hands, we will use our legs when shuffling from one section of the airport to the next. Of course, we would want something comfortable yet stylish. Alicia Vikander is definitely able to pull off wearing a pair of chic tailored pants, along with a cute set of footwear. This Swedish actress, who almost became a lawyer, certainly has excellent fashion sense.

After a long flight, we might want to leave the terminal right away after landing. And when we do, we should look stunning and stylish. Diane Kruger’s Forever 21 sweater dress number certainly fits that requirement. I think though, whatever Diane wears would look good on such a beauty.

Aside from waiting for the plane to land and watching movies, what else can be done on a long-haul flight? One can sleep, of course. Perhaps this is what Rosie thought when she paired a robe-like duster with skinnies to create that relaxed, yet sophisticated vibe. Also, to be able to sleep soundly on the plane, it is best that travel insurance has been secured beforehand.

When you are connected to the royal family, everyone is watching you, whether on the plane or not. Pippa Middleton’s classic chic cape coat serves as a reminder that when you are on the spotlight, you always need to look your best, even on a chilly night. We can only imagine the pressure Pippa feels every time she goes out and travels, knowing that as the younger sister of the Duchess of Cambridge, reporters are around to take pictures of her.

The tracksuit of today has evolved from the bubble-gum colored Juicy Couture that was in vogue in the early 2000s. What is more exciting is that Elle Fanning wore the tracksuit like a pro when she was spotted in them during her flight to Taiwan. The younger sister of Dakota Fanning is undoubtedly given credit as a fashionable start. Coincidentally, the reborn tracksuit and Elle pair up magnificently as both are now in their 20s.

When travelling, you will end up having to walk far, and TSA will ask you to take off your footwear, be asked questions about everything from the mundane, even on the shortest flight. So when it was time to head to the airport, Miranda Kerr decided to wear a pair of stylish pair of sneakers that she can easily slip on and off—talk about having foresight! 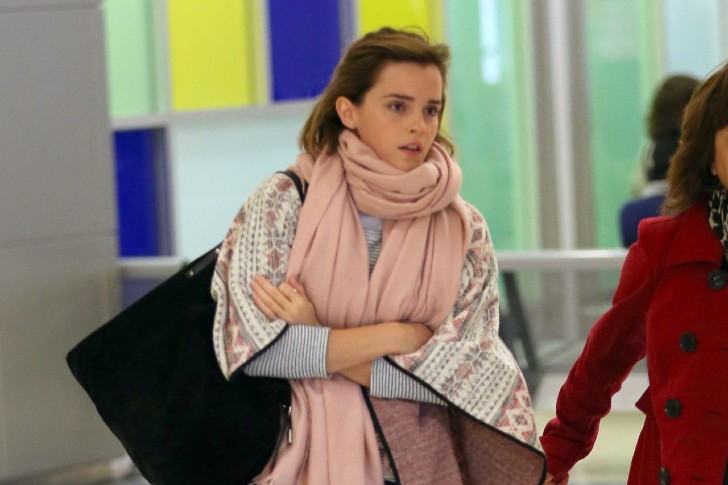 Emma Watson is Hermione Granger, and Hogwarts students are known for their scarves. When she’s not whipping up magic spells, Emma Watson likes to travel, and she has been seen wearing enormous scarves that can actually double as a blanket, making her comfortable on each flight. She has not been afraid to experiment with to stay classy and comfortable. Let us just hope that before she hops on to her next flight, she activates her home security in addition to casting a Repello Inimicum.